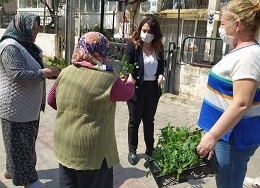 Buca Municipality in Izmir, which works to spread agricultural production throughout the city as well as food safety, launched the Balcony Farming Project during the pandemic days. Within the scope of the project, over 2 thousand vegetable seedlings, which are distributed to 500 households, will grow on the balcony of Buca citizens. Saying that the project will increase morale while increasing the agricultural efficiency, the Mayor Kılıç said, “Buca citizens will stay safe at home and produce their vegetables at home”.